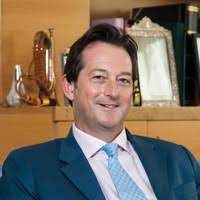 Nicholas Hopton was born in Manchester and raised in York. After St Peter’s School, he studied at Cambridge University, La Sapienza University in Rome and ENA in Paris. He was a Visiting Academic at St Antony’s College, Oxford, in 2013/14.

Nicholas’ career has been  in diplomacy. Until September 2021, he was UK ambassador to Libya. Previously, he served as Ambassador to Iran, Qatar and Yemen and worked at the British Embassies in Paris, Rome and Rabat. In the UK, roles included: preparations for security and foreign policy cooperation with the EU after BREXIT and leading the International Organisations Department in the FCO; national security issues at the Cabinet Office; in No 10, organising a Progressive Governance Summit for Gordon Brown; and Private Secretary to four Ministers for Europe at the beginning of the Blair administration.

Nicholas enjoys sailing, walking, music and public speaking. He also writes fiction, such as the novel, In Pieces, about London in the nineties. His latest book, Maremma Mia, is about Italy.

Nicholas is married to Alejandra with five children.