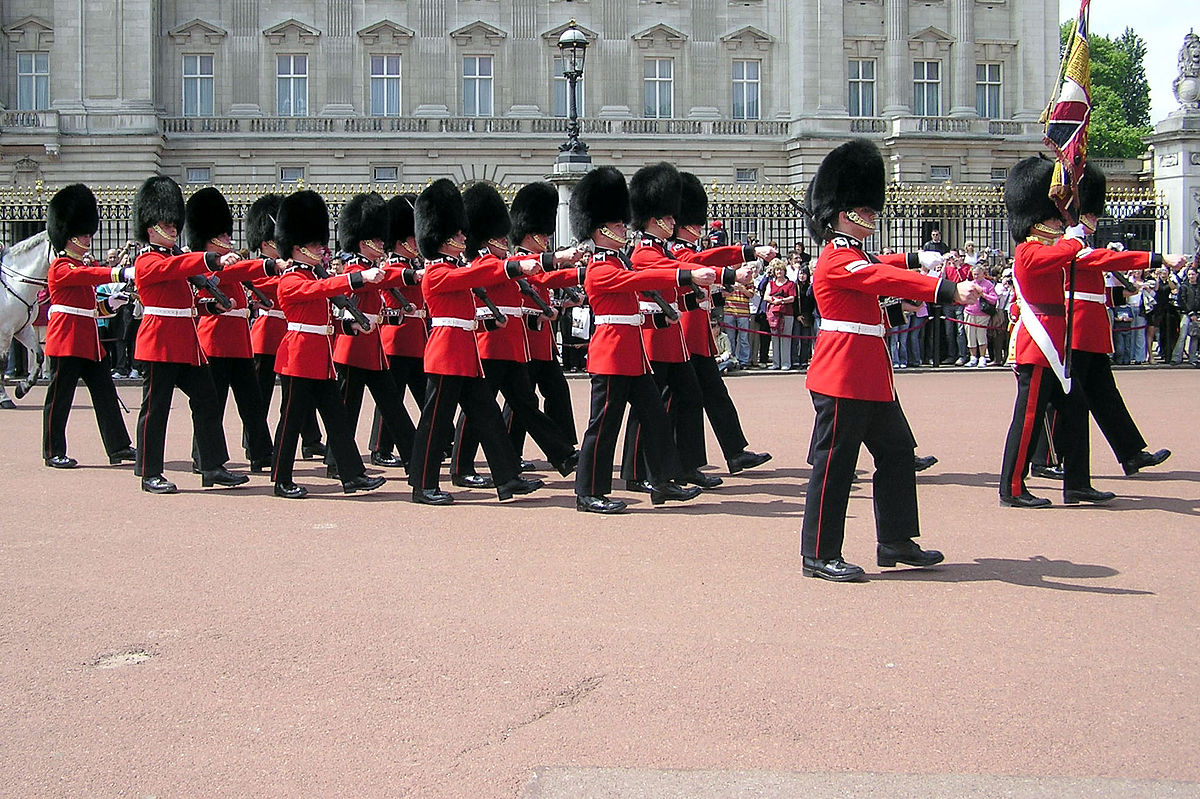 ‘Precision drill and bands playing stirring music all combine to make Changing of the Guard one of London’s most popular attractions’ epitomising ‘the pomp and military ceremony for which Britain is famous.’ So, states one enthusiastic tourist website. Buckingham Palace’s website is predictably more restrained and precise: ‘Changing of the Guard is one of the oldest and most recognizable ceremonies connected with Buckingham Palace. The correct name of the ceremony … is actually Guard Mounting.’ The exchange of duty from the Old Guard (protecting Buckingham Palace and St. James’s Palace just down The Mall) to the New Guard housed in Wellington Barracks on the other side of St. James’s Park, attracts vast crowds (except during COVID-19) at 11am four times a week from May to August, every day in June and July. Behind the pageantry – immortalised in British author A. A. Milne’s (1882-1956) endearing (and biographical?) poem about young Alice’s visit to ‘Buckingham Palace’ (in When We Were Very Young, 1924) – is the brutal reality (witness the police presence) there are plenty of enemies of the Queen, Royal Family and British system who would gladly do away with the lot of them. For all its palpable traditionalism, the ceremony also embodies the warning to monarchs, Presidents, tyrants and terrorists: ‘Power – like trust, and their vital concomitant ‘influence’ – is a precious commodity that is hard won and swiftly lost.’ Witness the shaking of the British establishment at the time of Princess Diana’s death in 1997.

Though often used to connote an orderly exchange of power, ‘the Changing of the Guard’ is replete with menace. Much blood has been spilled over the centuries by new brooms (read long knives) sweeping away old regimes. Of late, China, Russia, Zimbabwe, Iran, and other totalitarian regimes have witnessed an equal amount of blood spilled to keep corrupt leaders and their complicit (or terrified) cronies in positions of power. Recent events on Capitol Hill in Washington, DC, suggest the promised (and traditionally expected) ‘orderly exchange of power’ from one Presidential Administration to another, may yet become an (even more) unsightly spectacle to many – except, perhaps, to enemies of the Presidential Office and of the admirable legacy of American democracy. How very sad this is to see.

To wile away long Winter evenings in our rural retreat, my wife and I have been re-watching the period drama Downton Abbey. It is easy on ear and eye! In fact, to Downton devotees, we live amid key locations: Highclere Castle (Downton Abbey) is 25 miles south of us, Bampton (Downton village) is 6 miles north, and Lord Merton’s delightful house 2 miles away in Kingston Bagpuize. Here is a fictitious portrayal of Britain’s famed (but fading) love of ‘pomp and circumstance’ – engagingly evoked in elegant dining rooms, liveried servants and elaborate ceremonies – that signifies more than nothing, but far less than once upon a time. To the thoughtful, the series celebrates the wisdom of the Book of Proverbs, ‘Do not move an ancient boundary stone set up by your forefathers’ (22.28, 23.10). Tradition stabilises life.

As a diverting tale of life ‘upstairs’ and ‘downstairs’ in a grand English home in the early years of the 20th century, Downton Abbey makes much of power and hierarchy, good breeding and moral failure. Characters know – or are meant to know – their place. The tragedy and disruption of World War I. The racy revolution of the ‘roaring 20s’. The shift from land and ‘service’ to city, town, and ‘job’ – to say nothing of the new ‘weekend’! The Grantham family (the Crawleys) are divided in their response. The old Dowager Countess (Maggie Smith) is an impassioned traditionalist; as are the Butler Carson (Jim Carter) and, to a lesser extent, Lord Grantham (Hugh Bonneville): the American heiress, Lady Grantham (Elizabeth McGovern), and the family’s three daughters – to say nothing of the staff – far less so. ‘Change is coming’ echoes through the Servant’s Hall. The Labour Party has its first Prime Minister, Ramsey MacDonald (1866-1937; PM 1924, 1929-31). Women’s suffrage is a live issue (The Equal Franchise Act, 1928). The changing of this ‘Old Guard’ cannot come soon enough for some. No blood may be spilled, perhaps, but many (old) lives will be lost and (new lives) found. Adaptation and acceptance are encouraged. Time will tell if this is true in real time modern America.

History and the author of Downton Abbey, the well-born Lord Julian [Kitchener-]Fellowes (b. 1949), caution us: those who try to hold on to power and position tend to lose both. Democracy may only be Churchill’s ‘least-worst’ political system, but to those habituated to the electoral game, better the stump, campaign circus and ballot box than any dull, repressive alternative. The ‘changing of the guard’ that an orderly election initiates is part of this game, and usually as admirable and civilized as the colourful parade outside Buckingham Palace. Not so this time in Washington.

So, what of democracy at this critical time in world history? And what may one day be the infamous ‘last days of Trump’?

The much-studied crisis in American politics and society that the November US Presidential Election and its aftermath embody has, I suggest, confirmed three principles behind democracy that support its basic tenet, viz. ‘one person, one vote, in a free and fair expression of the mind and will of a people’. Before considering these, two general points.

First, democracy is ever-changing and necessarily flawed. Whenever people are involved, accredited systems of political power and monetary exchange flounder. Democracy (in whatever form) and the ‘rule of law’ are not accidental associates: they are necessary allies. To have one without the other is impossible. Power corrupts. People wander. Safeguards are needed for and against both. As the French philosopher-lawyer Montesquieu (1689-1755) recognised: ‘If a republic be small, it is destroyed by a foreign force; if it be large, it is ruined by an internal imperfection.’ And, when you have a moment, trace the history, diversity, and complexity of what we now call simply ‘democracy’. Watch it evolve from the enfranchising of the demos (viz. the people, not just elites) in 5th century BC Greek city states, through Magna Carta (1215) and myriad medieval forms of societal ‘elections’, to the birth of Britain’s ‘Westminster’ system in the ‘Petition of Right’ (1628), the early-17th century Virginian ‘House of Burgesses’ and the pioneer Corsican Republic (1755). And then on through the French Revolution’s National Convention (1792), the pivotal 1828 US Presidential Election, the expansion of the franchise in the UK’s Reform Act (1832), and the creation of a slew of new Republics in the late-19th and 20th centuries. Too rarely was there a peaceful, bloodless ‘changing of the (political) guard’. Too readily do we claim ‘democracy’ to be a stable, straightforward panacea for societal ills. Far from it: freedom cultivates conflict. However, as the Austrian-British philosopher and social commentator Karl Popper (1902-94) urged, elective democracies (contra tyrants and dictatorships) do provide mechanisms for voters to control leaders and remove them without revolution. Better this than their opposite.

Second, and this is crucial, in a democracy every vote is equally valid and important. Responsible democracies will always reject the principle – parodying George Orwell’s (1903-50) Animal Farm (1945) – ‘All votes are equal, but some votes are more equal than others.’ The secret ballot is under threat when over-scrutiny of voters and voting patterns prevails. Political fires are kindled by campaigns to win sectors of society. Passions were running high – for which the media is partly to blame – long before last week’s outburst on Capitol Hill.

So, to three principles sustaining democracy:

i. The unwritten rule that electors will accept the result. There is no meaningful democracy if canvassing continues after the ballot-box. In liberal democracies regular elections are baked into the system. ‘Win-lose’ rhetoric is misleading: ‘If not now, then later’, is better. Those who proclaim a particular election or result ‘decisive’ or ‘mistaken’ miss the point: every election is a partial, provisional assessment of public opinion, readily reversed come the next Election. When partisan fury dulls this principle the priceless gem of a free, regular vote turns to paste. And, anyway, it’s not only cynics who say most governments achieve very little!

ii. Democracy is built on the premise that voters can elect and un-elect officials, who will then keep or surrender office. Democracy and dishonesty may (sadly) co-exist at times, but few candidates would be elected if they told hustings they intended to hold office in perpetuity! But something more sinister is happening in the US than a reluctance to allow the ‘Old Guard’ to change. ‘Representative democracy’ (with orderly elections) is threatened by its aggressive, populist, rival ‘Direct democracy’ (where the mob rules). We should not assume defeated Democrats would not have also stormed the Capitol last week. In the acute political, social, and economic bifurcation of early 21st century America (which pre-dates President Trump) ‘representation’ is sadly spelled ‘confrontation’. No wonder America’s enemies have mocked its (dysfunctional) political system and trumpeted their own (dictatorships). An orderly ‘changing of the guard’ exudes political stability. Democracies world-wide be careful!

iii. As glimpsed already, democracy depends on the ‘rule of law’ and vice versa. In his analysis of the structure of democracy American political scientist Larry Diamond (b. 1951) discerns four elements, viz. free and fair elections, public participation, protection of the ‘rights’ of every citizen and an equitable and effective ‘rule of law’. We might add, though ‘democracy’ as a political ideology has evolved over the centuries, continuity in law has been a constant. Echoing Proverbs, this ‘ancient boundary stone’ has not been moved. The ‘rule of law’ is one of the ‘guardians’ of the state that does not change at 11am each day. The reason many inside and outside America sense a shaking of its political and constitutional foundation is that the ‘rule of law’, barricading its Presidential Office, Electoral System and Capitol buildings, seems to have been deliberately breached from inside and out. A ‘boundary stone’ has been moved.

So, what of ‘the last days of President Trump’? Historians, biographers, and filmmakers will build careers on this. Even friendly outsiders look on aghast. Not that the showmanship, provocation, and buffoonery of it all are unexpected, but that so many tenets of democracy have been, and are being, ignored by Republicans, Democrats and the new ‘Trumpians’ alike. The world has been enriched by American democracy; how tragic if democracy worldwide is now impoverished by it. But it is not too late for establishment America to rise up to proclaim and protect their country’s own proud tradition for ‘the Changing of the Guard’.