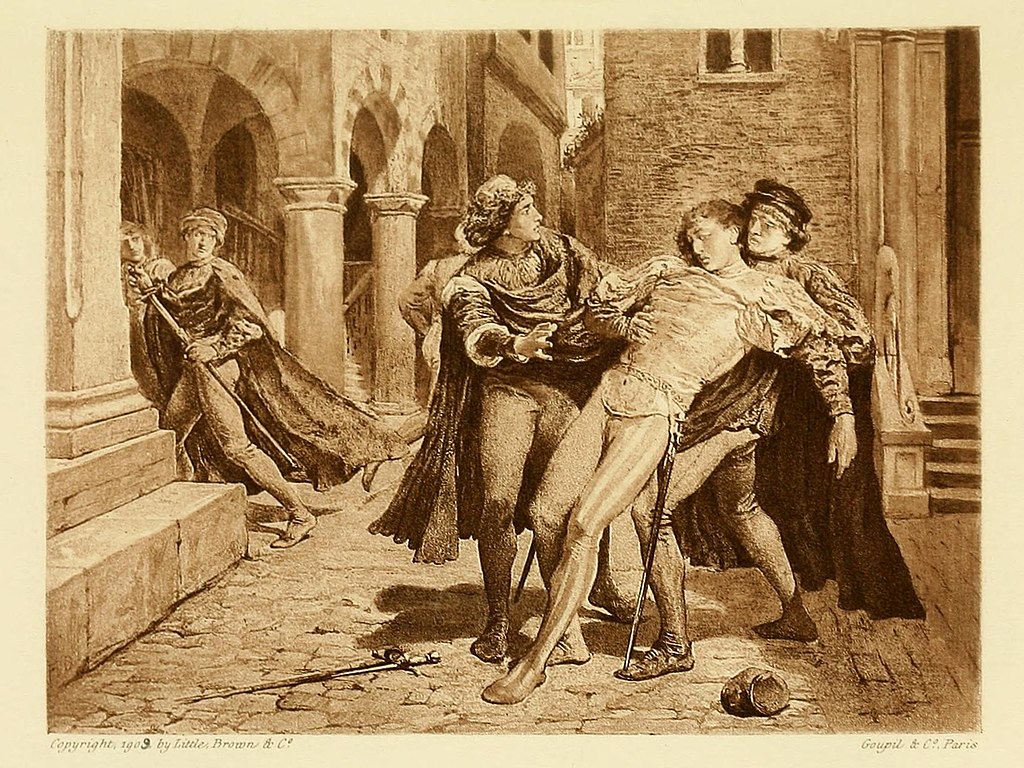 The curse uttered three times in Act III.1 of Shakespeare’s (1564-1614) tragedy Romeo and Juliet (1597), ‘A plague o’ both your houses’ (when Mercutio is stabbed by Juliet’s Capulet cousin Tybalt), has become an icon of Western nihilism (life has no meaning or values). Sometimes translated ‘a pox on both your houses’, the words give voice to acute frustration and angry bitterness. Mercutio dies a victim of a futile feud. He is collateral damage from an entrenched internecine conflict.

In Shakespeare’s masterpiece, Mercutio’s curse foreshadows the fate of the ‘star-crossed lovers’ (who secretly marry): Juliet will fake her death with a sleeping potion (to avoid marrying Paris), Romeo will commit suicide believing Juliet dead (a crucial letter from Fr. Lawrence having failed to arrive in time) and Juliet will stab herself over the corpse of her beloved Romeo. An accursed tragedy indeed. The houses of Capulet and Montagu both suffer. Mutual destruction wins. Mercutio’s private tragedy becomes a symbol of his society’s futility and slaughter. Or, as the brutal Soviet leader Joseph Stalin (1878-1953) is quoted as saying: ‘One death is a tragedy; a million deaths is a statistic.’ The truth of the whole extrapolated from the part. Johns Hopkins University may tell me that there are today (July 27) 16,264,048 cases of coronavirus worldwide and 648,966 deaths; but ask relatives of the dead and dying, to them one life matters. To some, caught in the crossfire of diplomatic disputing, politicised interpreting, and industrial espionage over COVID-19, ‘a plague ‘o both your houses’ might express their grief, anger, despair, feelings of futile waste and sense of crippling powerlessness. Collateral damage is a cruel term for such.

Where is faith in this?

We glimpse something of Mercutio’s anguish in Nobel Prize-winning, Algerian French, novelist, journalist, and philosopher, Albert Camus’s (1913-60) dark, evocative novel La Peste (1947; ET The Plague, 1948), in which bubonic plague strikes (once again) the Algerian city of Oran. It is an ‘absurd’ story, full of tragedy, folly, and bitter humour. Camus disputed the term ‘existentialist’ and denied it applied to his writing. But there is little doubt La Peste – like all of Camus’s writing – addresses issues of ultimate, ‘existential’, concern. Sorrow, sickness and death set in sharp relief the transience and absurdity of life – and, thence, as elsewhere in Camus’s works, the importance of not wasting time trying to explain it! Camus’s death in a car crash on January 4, 1960, aged 44, adds poignancy to all he wrote, especially of the finitude, futility and powerlessness people feel when faced by life’s fragility and ‘absurdity’. But, like Mercutio, Camus’s words also had, and have, a ‘foreshadowing’ quality. Their realist – technically ‘nihilist’ – insights resonated with post-War European anguish. His narrative existentialism offers us, too, in these plagued pandemic days, a potent literary resource as we face our sense of physical vulnerability and need, perhaps, to re-examine the foreshortened horizon of everyday life.

Like a Dickens novel, La Peste is populated by vivid characters; particularly, by over-whelmed medics and officials. Among them are Drs Rieux, Castel and Richard, the city’s Prefect and clerk, Joseph Grand, the officious magistrate Othon, a traveller Tarrou, an eccentric salesman Cottard, and a slippery journalist Rambert. Camus’s style is stark and dark. The plague is personified, acting, Camus writes, ‘with the punctual zeal of a good civil servant’. Unsurprisingly perhaps, given Camus’s suspicion of religion, the local priest, Fr. Paneloux, is ineffective, being incapable of connecting God with the tragedy unfolding. With absurd humour, Camus has Fr. Paneloux dying of something other than the plague, during a performance of Gluck’s Orpheus and Eurydice, in which most of the cast succumb! Futile faith and honest, practical action are shamelessly juxtaposed. Towards the end of the novel, when the plague has receded, the narrator reflects: ‘[T]here is more to admire in men than to despise’; adding solemnly in the last sentence ‘[T]he plague bacillus never dies or disappears for good … for the bane and enlightening of men’ it will ‘rouse up its rats again and send them forth to die in a happy city’ (1991: 308). Humanism outshines fideism (a system of life and thought based on faith); but the absurd unpredictability of life ultimately conquers all.

There is much in Camus for us today. The return of existentialism and nihilism to contemporary literature opens important opportunities for dialogue between the Arts, faith and daily life. For now, I suggest Camus’s La Peste highlights three features of the global coronavirus pandemic.

First, the predictable unpredictability of a virus. Though Camus casts his plague in the role of an efficient bureaucrat, events (like viruses) contradict this persona. People die and die unexpectedly, young and old both lost to COVID-19. In La Peste, it is not only members of an opera chorus and Fr. Paneloux who die, but Dr. Rieux’s mother (medicine is no protection) and the magistrate Othon’s son, Philippe (the law is likewise powerless). But the shady characters Raoul and Gonzales (who help the journalist Rambert try to escape) thrive. There is a painful, and provocative, arbitrariness about Camus’s plague. No connection can be made between victim and cause. There is a tragic arbitrariness and inevitability about life and death. To the nihilist, ‘Life and death are just like that: there is no point trying to explain them.’ Unexpectedly, perhaps, we glimpse something of this in Judeo-Christian wisdom. Ecclesiastes declares: ‘For the wise, like the fool, will not be long remembered … Like the fool, the wise too must die!’ (2.16). If there is a connection between victim and cause, then it lies in the predictable unpredictability and universality of death. As polymath ‘Founding Father’ of the United States, Benjamin Franklin (1706-90) wrote wryly to the French physicist and encyclopaedist Baptiste Le Roy (1720-1800), ‘In the world nothing can be said to be certain except death and taxes’!

Camus, the reluctant existentialist, invites his readers – like the plague – to look death in the eye, for its absurd unpredictability cleanses inauthenticity.

Second, the reassuring capacity of humanity. For all his cynicism in La Peste, Camus remains a tenacious humanist; as he wrote in his ‘Letter to a German friend’ (1945): ‘I continue to believe that this world has no supernatural meaning … But I know that something in the world has meaning, and that is man, … the only creature to insist on having one’ ([1944] 1961: 28). His horizon is bound to this world. People struggle in his novels like characters in a Greek drama. Nietzschean atheism not Christian orthodoxy shapes his vision. He parodied Catholic dogma, ‘The world is beautiful, and outside it there is no salvation’ (Lyrical and Critical Essays [1938] 1968: 103). And, again, ‘I can see no point in the happiness of angels … I do not want to believe that death is the gateway to another life. For me it is a closed door’ (76). There is simply ‘no superhuman happiness, no eternity outside of the curve of days’ (90). But Camus’s lack of faith does not make him ungenerous. In La Peste humanity’s (small) acts of heroism inspire confidence and indict religion’s arrogance. This may not make for comfortable reading for people of faith, but honesty accepts Camus’s critique. The coronavirus pandemic contains inspiring tales of humanist heroism. Medics and care workers, bus drivers and neighbours have all stepped in, made sacrifices, given a good account of humanity at its best. Unwittingly, perhaps, sharing Camus’s world, many of these could play a worthy role in one of his novels. Religion – particularly in its institutional and formal expressions – has not, from the negative commentary I have read, fared so well, suffering its own coronavirus ‘crisis of faith’.

Third, picking up the last point, Camus’s La Peste sheds light on the risky nature of religion in a time of pandemic plague. As politicians and media pundits have illustrated in recent months, finding the right language and tone to address an unprecedented crisis is challenging. If people of faith and religious leaders have been lost for words, they have not been alone. But more is – fairly or unfairly – expected of them. ‘Faith frequently speaks of the unspeakable, why not of God amid a coronavirus crisis?’ some might say. Camus is, of course, not the only writer to portray clergy as wooden and ineffective in a time of crisis. In his Canto LXXXI, Ezra Pound (1885-1972), Camus’s brilliant, but troubled, trans-Atlantic contemporary, portrays Fr. Elizondo as a symbol of futile labour, and the phrase ‘eyes pinned to the ritual’ is an indictment of Catholic ritual and formalism (in contrast to the ‘divine’ signs of beauty and nature). Many other examples could be cited!

The simple fact is ‘faith’ is, by definition, ‘risky’. It makes a claim and builds a life in the face of evidence, which is scant, contestable, or plain contrary. It expects antipathy and controversy. To claim to ‘see’, when others do not, is a risky business; and, for that very reason alone, to be ‘Handled with Care’. Faith is always faith: it suffers and struggles with the same data as unbelief. It sees, like Camus, the unpredictability of death and the capacity of humanity; but, as we read in Psalm 49 of the Hebrew Bible (echoing Ecclesiastes 2.16), it wills to go beyond ‘wise men die; the foolish and the senseless alike perish’ (v. 10) to a quiet confidence that somehow ‘God will redeem my life from the grave; he will surely take me to himself’ (v. 15). And, in the words of Psalm 91, does not fear ‘the plague that destroys at midday’ (v. 6). Religion and faith/s of every kind take the long view: they hope for an end and final validation of their spiritual quest.

Death is a stark reminder that nihilism like fideism is a choice. The COVID-19 crisis has revealed not only humanity’s capacity for compassion but also its wilful self-centredness and predisposition to protest if thwarted with ‘a plague ‘o both your houses’. The world can go on fighting like Capulets and Montagus, but that is the path to mutual destruction and massive collateral damage. Conflict, like a plague (and it comes in many forms) will ruin us, if we let it. As Camus warned, the plague ‘never dies or disappears for good … [it will] rouse up its rats again and send them forth to die in a happy city’. It can also be ‘for the bane and enlightening (ed.) of men’. Thankfully, tragedy, as in Shakespeare, can speak deep truth.