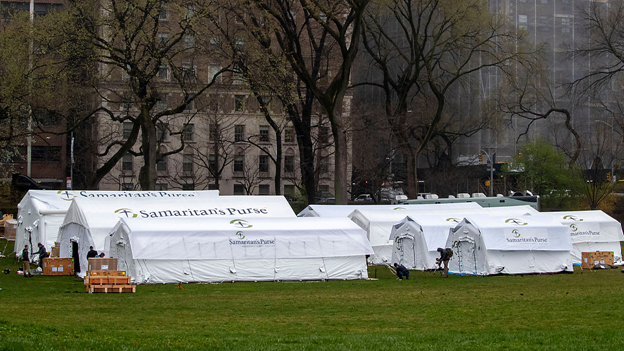 By late February 2020 it was clear COVID–19 was going to be disruptive, and not just to our international travels. Broadcasts reported graphically of death and destruction in Italy, a far more familiar and immediate place to most Americans than the three-city megapolis of Wuhan, China, whose struggles gripped us in January. Even the optimistic knew the Atlantic was no barrier to what some would come to dub ‘the China virus’. But nothing and no one could have prepared us for its ferocity when it hit New York.

The Story
Art speaks to us in ways words do not; indeed, cannot. It draws on our intellect, imagination, feelings, sense of balance and proportion, and resolves these in an awareness of ‘beauty’. The Russian novelist Leo Tolstoy (1828– 1910) wrote that art requires a creator and a receiver; one without the other is not enough. The past 9 months are more than a story of a disease spreading around the world: they are the story of the receivers of that disease – and, thence, of how it has and is shaping minds and hearts, people and places, cultures and consciences, truth and perception.

The shut–down in New York began on 20 March 2020 when the governor ordered all non–essential businesses to close; that is, offices, schools, stores (except grocers and pharmacies), restaurants, hair salons, gyms, factories, entertainment venues and construction projects. The vibrancy of New York stopped, and the ‘city that never sleeps’ essentially shut down.

Two weeks later we were ordered to remain in our apartments, going out only to buy food or medicines. A self–confident, teeming city of 8 million, from every corner of the globe and with every aspiration under the sun, turned overnight into a ghost town full of fear and isolation.

Those who could leave, left. Everyone else stayed … indoors. The city turned silent. Traffic stopped. Subways ran, but empty. Music, ever-present in Harlem, SoHo or Broadway, on stoops and stages, from windows, car radios, and restaurants, pressed the ‘pause’ button. Even the familiar NYPD sirens ceased.

But the silence wasn’t complete. Ambulance sirens echoed 24/7 throughout the city. It was relentless. We fell asleep and awoke to sirens: the sound of people transported with an illness so little understood and on an epic scale. Isolation and anxiety became both more surreal and more frightening.

Then there were the striking visual images. The humanitarian agency Samaritan’s Purse, in conjunction with Mt. Sinai Hospital, set up a field hospital in the New Yorker’s haven of recreation and romantic trysts, Central Park. The US Navy hospital ship Comfort was deployed to the city’s harbor to expand its hospitals’ capacity. Here were ‘third world’ sights in ‘first world’ New York! –the financial and cultural capital of the world’s wealthiest and most powerful nation. Surreal doesn’t begin to capture it.

Grocery shopping became a blend of team sport and chess tournament. Neighborhood stores admitted ten people at a time. It could take 45 minutes to get inside. Lines wound down the sidewalk. Once inside, the shelves were largely empty – not just of toilet paper and cleaning products but of canned goods, baking supplies and meat. It took months before chicken was regularly available. Plans and calculations had to be made weeks in advance to find the right food at the right time. Children stood in line as parents split shopping tasks. Eyes were peeled for scarce products available nearby. I was reminded of life in Eastern bloc countries during the ‘Cold War’… but it was happening in America.

Whole sections of the city were deserted. My wife and I took long walks in April and May. On one occasion, we walked 80 blocks from our apartment to ‘Midtown’ NYC – and found it abandoned. But there are always crowds around Rockefeller Center and St. Patrick’s Cathedral. Not now. 5th Avenue is an urban artery, crowded with buses, cabs, cars, delivery trucks and delivery guys on bikes. Not now. We stood in the middle of 5th Ave and chatted at length … just because we could: there was simply no traffic at all.

Observations
We also had time to think. I began to consider the factors that create cultural coherence, and how quickly they shatter under pressure. I thought about myself and my family a lot, and the ways over the years (in China and the US) we have adapted to thrive. I became more aware of the subconscious roots of unquestioned assumptions that form culture, faith and values. COVID gave time and space to think. Four things stand out in retrospect – and we are not out of the woods.

Mindset
The shutdown was a shock to NYC’s collective nervous system. People move to New York for its people, its pace of life, its rich cornucopia of entertainments. For these, we put up with 700 sq. ft. apartments, high taxes, and crushing commutes. We pay 50% above the odds for goods. We most certainly do not do this in order to live only with ourselves. Fear and anxiety were obvious factors in the increase of depression for many, but do not underestimate the downsides of not having others to relieve us from ourselves.

Ethics
From its inception, the United States of America recognized the vital role civic institutions play in safeguarding and sustaining national life and curbing aggressive self-interest. Alexis de Tocqueville (1805-59) addresses this in his influential monograph Democracy in America (1835), as do the political scientist Robert Putnam (b. 1941) and Canadian philosopher Charles Taylor (b. 1931) in different ways more recently. Formal and informal institutions provide social glue and relational stability. The ill-preparedness and failure of delivery of key institutions in NYC – from its elected officials and authorities, to its hospitals, Center for Disease Control and financial hub on Wall Street – in the face of COVID-19 have diminished an already eroding faith in institutions, and scarred the city’s civic consciousness, trust and confidence: this will take a long time to heal.

Creativity
Though I reflected much in lockdown, I soon realized my creativity was drying up. I missed the stimulus of life ‘outside’, the buzz of the subway and sidewalks, the chatter in the office, the shouting above the noise. The once irritating intrusiveness of New York’s sounds and smells, its characters and shopfronts, its adverts and mobile phones, now became friends I missed, but more importantly the stimuli I needed. To a greater and lesser degree, we are all stimulated by the world around us – extroverts more than introverts, perhaps – but input nevertheless leaves us changed.

Worship
Worship is not constrained by place and space, but the closure of places of worship at the beginning of lockdown had – and still has – a substantial impact on the communities they serve. Churches large and small turned to live-streaming services and sermons (with different degrees of technical success!). Access became via a button not a door and further shifted the focus of worship from communal to self. Even after churches could reopen in July (with 25% capacity) many remained shut by the leaders’ choice or a landlord’s decision.

There are many drivers of theological change: coronavirus has been another one. The shift seen in American Christianity since the 1970s from active, local, lay involvement and a sense of community to a proliferation of megachurches, media-profiled preachers, and a more passive, ‘consumer’ driven view of worship, has left many confused about what worship really is. Is it mostly about a transfer of knowledge (the sermon) and how it affects me, or is there a way in which it mirrors the historic faith rooted in community and provides a way to give our worship to the One whom we call ‘Lord’?

The 18th century Scottish writer and politician Andrew Fletcher (1655–1716) once wrote, ‘Let me make the songs of a nation, and I care not who makes its laws’. Fletcher knew, as most artists do, the power of a nation’s soul and imagination. Yes, we need to get to grips with the medical science of COVID–19: we also need to reflect on who we are becoming through this – both ourselves and our culture. Like it or not, this strange and bewildering ‘vale of soul-making’ we are passing through may yet help us re-imagine ourselves as individuals and the kind of world we want to live in together. In the city that never sleeps we have much work to do.