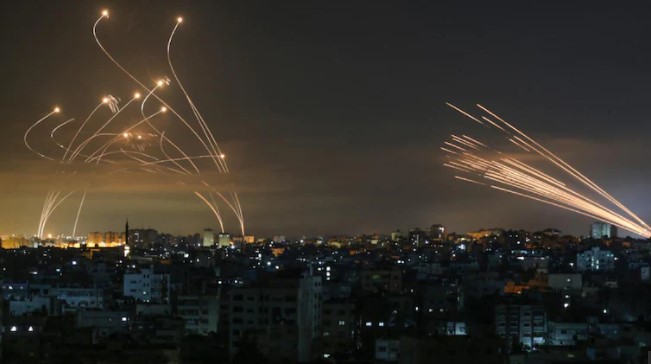 Pictures of rockets, rioting, chanting crowds, bleeding bodies, death, and destruction from Gaza, Lod, Jerusalem, Hebron, and Tel Aviv, have filled screens and dominated news coverage in the last seven days. International concern – sometimes outrage – at renewed conflict between Israeli and Palestinian militants, and now Jewish and Arab Israeli communities, has been broadcast widely. Governments in the West have responded circumspectly, fearful of inflaming matters or alienating voters. It seems apportioning blame is as entrenched as this ancient conflict; the ‘two state solution’, that many around the world saw as offering some kind of resolution, now a distant, implausible, dream. But to be clear: this is no new conflagration; the fires of hatred ignited by the formation of the State of Israel in 1947 have never gone out. Attempts at mediation and reconciliation have failed repeatedly. Other news over the years – and particularly in the midst of the present pandemic – may have deflected attention from unresolved Israeli-Palestinian animosity; not so, on the ground.

But why have the flames of this ancient feud been fanned now?

Single, simplistic, answers will not suffice. Deep ideological and cultural differences, and hard-headed domestic, political calculations, may in part explain the present crisis, but another set of clues lie in talks taking place right now in far off Vienna.

To clear away some of the undergrowth from this most complex of cultural, ethical, political, and geopolitical issues. At a fundamental – we should probably also say, ideologically ‘fundamentalist’ – level, Hamas’s raison d’être is the ‘liberation’ of the Palestinian people. The roots of the name ‘Hamas’ are illuminating. Originally from the Arabic Harakat al-Muqāwama al-Islāmiyya (Lit. Islamic Resistance Movement), over time the acronym HMS was glossed in the movement’s ‘Covenant’ by the Arabic word hamas (حماس), meaning ‘zeal, strength, bravery.’ Applied to its regional claims, Hamas seeks the wholesale destruction of the State of Israel, which it views as an artificial construct imposed by the Jews (and their international supporters) on the ancient people/s and land of Palestine. Hamas’s founding ‘Covenant’ or ‘Charter’ (1988) made this explicit, describing Palestine as an inherited land (Arab. waqf) that had been invaded (Art. 11) by an alien, hostile people. Hamas’s militant leadership vows to release its native Muslim and Christian communities from the grip of Israel. The Charter appealed to the religious significance of Jerusalem for Muslims (Art. 14) and urged the devout to engage in jihad (Lit. Holy War) to regain what was rightfully theirs. In other words, Hamas’s political-religious ideology leaves little, if any, room for negotiation … and, thus, for peace.

This ideological position has immediate relevance to the present situation for two reasons. First, the Israeli authorities appear to have shown extraordinary – if not deliberately provocative – insensitivity when they barricaded the iconic Al-Aqsa mosque (or ‘Dome of the Rock’) in the heart of old Jerusalem on the eve of Laylat al-Qadr (9 May 2021), a night especially sacred to Muslims when the Qur’an was given (or, better, revealed) to the prophet Muhammad. Heavy-handed actions by Israeli police and security forces (in which a reported 163 Palestinians and 6 Israeli police were injured) added fresh credence to the claim that Palestinian homes and lands had been ‘conquered’ by Israel and needed ‘liberating’ from an oppressive invader. Secondly, linked to this, Hamas’s ideology – like that of ISIS and other literalist Islamist groups – sees the month of Ramadan (which ended on May 12) as not just an opportunity for spiritual reflection but a time when Allah assures warriors of his blessing on jihad. Militant literalists justify this claim by citing Muhammad’s victory during Ramadan, on the so-called ‘Day of Criterion’, at the great Battle of Badr (13 March 624) in Al-Medinah Province (mod. Saudi Arabia). Recent events are, then, rich in symbolism – and play into the hands of Hamas militants and those who believe their rhetoric.

But it is not just the symbolism that is important. Recent events have drawn fresh attention to new, highly controversial, Jewish settlements in East Jerusalem – still known, note, to the majority Arabic speaking community as Arab Jerusalem. Since the annexation in June 1967 of 27 sq. miles of the West Bank, East Jerusalem has been a flashpoint for Jewish-Palestinian tension. New build Jewish settlements have fanned the flames of old resentments. The annual celebration on 10 May 2021 of the capture of Jerusalem in 1967 was the match that ignited recent violence. Despite UN General Assembly Resolution 67/19 (2012), which defined East Jerusalem’s status as part of the Palestinian West Bank – and, thus, the extension of Israeli jurisdiction there, ‘occupation’ – Jewish settlers have been buying wholesale into the area – and, perhaps more strikingly, Arabs have been willing to sell to them both directly and, at times, indirectly. It is this hidden ‘ground offensive’ as much as Israel’s air attacks that Palestinians hate.

Looking at the recent crisis from the Jewish side, why have the Israeli authorities acted as they have at what appears to be a singularly inopportune, or deliberately provocative, time? Risks of all kinds attend both sides when they provoke the other.

One explanation for Jewish actions lies in the political instability of Israeli Prime Minister Benjamin Netanyahu (b. 1949; PM 1996-1999, 2009-present), who failed (again) to secure a majority at the elections for the 24th Knesset (23 March 2021). The 30 (of 120) seats and 24.19% of the votes that he secured, was neither a solid majority nor a convincing basis for a coalition government. As Middle East analyst Avi Assacharoff (b. 1973) recently pointed out in The Times of Israel (11 May 2021), Netanyahu faces strong, and growing opposition from a surprisingly broad coalition; including a nascent alliance between the former Minister of Diaspora Affairs (2013-2019) and Minister of Defence (2019-2020), Naftali Bennett (b. 1972), of the Jewish Nationalist party and Ra’am (the United Arab List, or Arab Islamist party). It may be cynical to suggest it, but Real Politik might see in the present crisis a convenient way for Netanhayu and allies to smokescreen deeper problems and fuel patriotic feeling. Even his widely praised vaccine programme has done little to inoculate Netanyahu against the socio-political virus of popular disaffection and widespread distrust.

But we should, perhaps, look further afield for another reason for Israeli actions at this time. Internationally, change has been afoot. President Trump (b. 1946; Pres. 2017-2021) shifted US policy in favour of Israel and, as if to seal this, controversially – and speedily – opened a US Embassy in Jerusalem on 14 May 2017, the seventieth anniversary of the signing of the Israeli Declaration of Independence. Previous US administrations had been reluctant to do this: for, unlike Tel Aviv (the US Embassy’s location from 1966) Jerusalem has the spiritual cachet of Jewish orthodoxy. In addition, the recent ‘Abraham Accords’ (13 August 2020), which the US facilitated, aimed to normalise relations between Bahrain, UAE, Morocco and Israel, and signal US endorsement of Israel’s statehood per se and standing within MENA. Neighbours were made all too aware that to take on Israel was to take on America.

With a new administration in Washington, Israeli officials expressed anxiety about changing US policies. Relief spread when incoming US Secretary of State Anthony Blinken (b. 1962) voiced his, and the administration’s, support for the ‘Abraham Accords’. So far so good to some. Relief soon turned to dread. For, while Blinken gave his personal endorsement to the ‘Accords’, the Biden administration as a whole began to re-open negotiation on the Joint Comprehensive Agreement Plan of Action (JCPOA) with Israel’s arch enemy – and major funder of Hamas – Iran.

To set this in context. The relations between Hamas and Iran broke down in 2012, although it had been rocky for some time. The final straw was Hamas’s decision to support Syrian opposition groups rather than the Assad regime, as Tehran was doing. However, changing dynamics in the region, along with a growing financial crisis within Hamas, pushed the group in 2016 to mend fences with Iran. Its early overtures were warmly welcomed. Al-Jazeera reported in July 2018 the then Israeli Minister of Defence, Avigdor Lieberman (b. 1958), believed most of $260m Hamas invested in buying weapons and digging tunnels in 2017 was ultimately sourced in Tehran. Israel was not slow to believe. Tremors of trouble ahead shook the region.

Under President Trump, the US withdrew support for JCPOA and aggressively re-imposed sanctions on key Iranian financial assets, in what was termed a ‘maximum pressure campaign’. The aim and intended impacts were crystal clear. Eighteen Iranian banks were put on the red list for sanctions, most notably the Iranian Central Bank for disbursing funds to Hamas and the Lebanese Islamist Hizbullah. In addition to financial strikes, in April 2019 President Trump added Iran’s Revolutionary Guard to the US terrorist watch list and, as an ultimate statement of intent, in early January 2020 authorised the assassination of Major General Qassim Suleimani (1957-2020), head of the elite Iranian Quds Force (a branch of the Iranian Revolutionary Guards). Maximum pressure was again intended. It was Suleimani who led the campaign in Lebanon that forced Israel’s withdrawal in 2000 and Suleimani who had instigated the counter insurgency against US forces in Iraq from 2003 to 2012. Hence, his death in a US drone strike on 3 January 2020 was not only symbolically significant: in the context of Iran’s relationship with Hamas and Israel, it was strategically significant, too. The Quds Force had been involved in training foreign militia for service with Iranian military against infidel enemies. As their commander, Suleimani was central to relations between Tehran and Hamas: his death shattered, at least temporarily, any Iranian idea to threaten, or de-stabilise, Israel.

So, more is at stake for Israel in the present crisis than hammering Hamas: preserving Israel’s sovereignty and security are on the line.

As I write, it is still unclear where the Biden administration will finally come down on the present clash between Israel and Hamas, and, more generally, the extent to which it will reverse the measures taken by Trump’s administration. Talks presently taking place in Vienna may hold the key. A recent report in Foreign Policy (15 April 2021) spoke of US diplomats working to rescue JCPOA and offering to roll back some of the sanctions imposed under Trump; sanctions, that is, that among other things targeted the Iranian Central Bank, key distributer of funds to Hamas and Hizbullah. Details of an agreement remain vague. Ali Vaez, Iran Project Officer for the conflict resolution NGO International Crisis Group, has suggested existing sanctions may give way to targeted pressure (such as the imposition of sanctions when, or if, Iran engages in cyberattacks against the US). If Vaez is correct, negotiation signals to Iran that as long as US interests are safeguarded Iran’s regional influence will remain unchecked. If this is what is on the table, neither Israel, Saudi Arabia nor other states in the region will sleep peacefully; while for its part, Hamas may find here ground for renewed self-confidence and militancy. From the Israeli side, with the talks in Vienna scheduled to end on 21 May 2021 and the likelihood of sanctions and financial restrictions on Iran to be eased, it may be deemed judicious to press home its advantage now before Hamas has funds and time to re-equip.

Seen in this light, events surrounding Haram al-Sharif (the ‘Temple Mount’ or ‘Dome of the Rock’) in old Jerusalem begin to look more like calculated provocation than a PR blunder. The fact that the ‘Abraham Accords’ give Israel more regional political cover is also to Israel’s advantage. But provoking Hamas – and sympathetic Arab and North African friends, who remain unconvinced their leaders signed the ‘Abraham Accords’ faithfully and wisely – is still a gamble. Hamas and the West Bank may yet be flooded with money and new recruits despite the unholy marriage of convenience between Israel, Saudi Arabia and other signatories of the ‘Accords’. The arrival in the region on Friday (13 May) of the US Envoy, Deputy Assistant Secretary of State Hady Amr (b. 1967), may help to de-escalate matters, but much blood has been spilled on both sides already. Passions that have been inflamed will be slow to cool. Israeli and Palestinian militants may be pawns in a bigger game, but they have deliberately – and quite literally – been ‘playing with fire’ that has, and may yet, cost many lives.