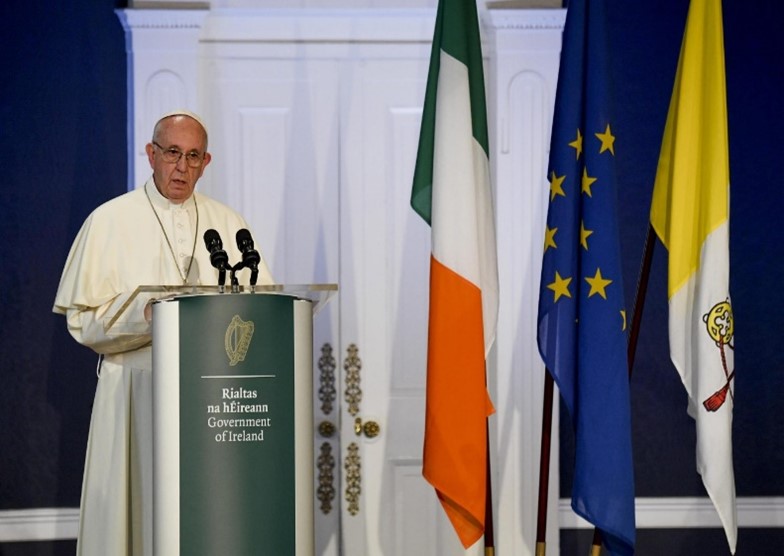 To many outside observers, Ireland is, and always has been, a bastion of Catholic faith and power. Reality is rather different. In this ‘Weekly Briefing’ I look at the history and politics of Catholicism in Ireland and at the impact child sex-abuse has had on the spiritual life, public profile and political standing of the Irish Church (Protestant and Catholic). History can be a harsh mentor. Stories it tells can be hard to hear but must be told.

The first thing to say is, the (new) sad story of Catholicism in Ireland is inseparable from the (old) complex issue of Irish nationalism. The best and worst of ‘Christian nationalism’ are seen here. Of course, Christian nationalism per se has always been found in different institutional and conceptual forms, and in this sense its Irish expression is not unique. A survey of Christian nationalism will include its benign, theoretical form in ‘ecumenism’ (where institutional pluralism trumps divisive ‘identity’), in the crafted socio-political vision of Dutch Reformed theologian and Prime Minister Abraham Kuyper (1837-1920; PM 1901-5), and in the durable ideal of Church-State relations seen in Britain. Christian nationalism’s less friendly face has been shown (again) recently in the ‘Unite the Right’ rally in Charlottesville, Virginia (13 May 2017) and Capitol Hill riots (6 January 2021), where banners boldly declared, ‘Jesus 2020’ and ‘Hold the Line Patriots. God Wins’. As Ireland shows ‘One size does not fit all’ when it comes to Christian nationalism. Caveat emptor!

Changing attitudes to Church-State relations in Ireland can be mapped against recent papal visits. When John Paul II (1920-2005; r. 1978-2005) came to Ireland in 1979, though sex-abuse was known institutionally, 2.7m. Irish Catholics attended outdoor Masses. By the time Pope Francis (b. 1936; r. 2013-present) arrived in Ireland in late-August 2018, the abuse of children by predatory priests had ravaged the reputation of the Catholic Church world-wide, including in Ireland. 500,000 tickets were printed for the final Mass in Dublin’s Phoenix Park (the number who had gathered for John Paul II), but (probably) no more than 130,000 attended. John Paul II told the crowd, ‘Young people of Ireland, I love you’: Francis began his sermon – after meeting eight survivors of abuse – ‘I want to place before the mercy of the Lord these crimes and ask for forgiveness for them.’ No event illustrates the extent of the change in Ireland and Irish Catholicism between the two papal visits than the reception for Pope Francis in Dublin Castle. No pious crowds now; instead, a strained Pope with shamed dignitaries ready to admit the ‘failure of ecclesiastical authorities – bishops, religious superiors, priests and others – adequately to address these repugnant crimes’ which has ‘rightly given rise to outrage and remains a source of pain and shame for the Catholic community.’ Adding, ‘I myself share those sentiments’ (Irish Times, 25 August 2018). The then Taoiseach, Leo Varadkar (b. 1979; T. 2017-2020), made all too clear to the Pope the need to bring justice and healing to survivors. But past and future events illuminate this visit, and to these we turn.

What has followed from the most recent papal visit? In March 2021 news feeds still report the fall-out from the Irish Catholic church’s institutional failure. As a case study in the exhaustion of Western Christendom, Ireland is the grim gift that keeps on giving. Stories abound of forced adoptions, illegally registered births, clerical sexual abuse and, most recently, the widely publicised report on ‘mother and baby’ homes, with many adopted Irish struggling to access their birth certificate. A toxic combination of small country anthropology and religious censure have conspired to create a seemingly impermeable culture of secrecy, collusion and cover up. Anger at injustice bubbles away. A once-respected church has, it seems, fractured the sacred covenant of societal trust. The history of Irish Catholicism teaches the grim lesson of the indelible, to some tragically incurable, pain of abuse. In artistic terms, Irish Catholicism is better expressed by the 1940s ‘shock art’ of tortured, Irish-born painter Francis Bacon (1909-1992) than the well-observed Modernist ‘disenchantment’ of his literary contemporary Samuel Beckett (1906-1989).

The history of Irish Catholicism also sheds light on the present. To make sense of the data, we need to understand how Catholicism became the sine qua non of Irish identity and nationalism. At the end of the 19th century, as the old order of Empire imploded, Europe witnessed a rising tide of nationalism. The birth of the secret anti-British ‘Society of United Irishmen’ (fr. 1791-1804/5) and the leadership of Wolfe Tone (1763-1798) during the 1798 Irish Rebellion – fired as both were by revolutionary France (1789-1799) – still inspired a few; but constitutional, peaceable, Irish nationalism attracted a majority from across the religious and political divide. However, a new ‘Romantic’ view of Ireland, Irish language and culture, and Irish nationalism, was seeded in the late-19th century. The prime mover now was the Protestant Douglas Hyde (1860-1949), later first President of Ireland (fr. 1938-1945). Founder of the Gaelic League (in 1893) and closely connected to a revival of the Irish language, Hyde spoke at the National Literary Society in Dublin on ‘The Necessity for de-Anglicising the Irish’ (25 November 1892). It was this kind of nationalism that attracted the attention of the Catholic establishment. It was also music to the ears of the more romantically minded leaders of the ‘1916 Rising’ (against government by London), like the gifted teacher, barrister, author and political activist Pádraic Pearse (1879-1916). Indeed, it was Pearse more than any other who ultimately ‘baptised’ Irish nationalism as distinctively Catholic; although the journalist and cultural-political activist D. P. Moran (1869-1936) was the principal voice for Gaelic Irish Catholic nationalism, writing famously in this journal ‘The Leader’ (27 July 1901) ‘… the Irish Nation is de facto a Catholic Nation’. In time, the Protestant (Royalist) ‘establishment’ minority must give way to the Catholic (Republican) majority. Or, as scholar-politician Conor Cruise O’Brien (1917-2008) would write many years later: ‘Irish-Ireland was Catholic Ireland’ (Ancestral Voices [1994], 32).

Problematically, the perspective Pearse promoted was – and remains – controversial. His publications, role in the ‘Easter Rising’, and drafting of the ‘Proclamation’ for the anti-British Irish Volunteers and Irish Citizen Army, safeguard his prominence in modern Irish history, but modern, secular Ireland struggles to absorb his ‘sacral’ view of Catholic Irish identity. Here’s how he wove Romantic Irish nationalism from simple Catholic thread:

Like a divine religion, national freedom bears the marks of unity, of sanctity, of catholicity, of apostolic succession.  Of unity, for it contemplates the nation as one; of sanctity, for it is holy in itself and in those who serve it; of catholicity, for it embraces all the men and women of the nation; of apostolic succession, for it, or the aspiration after it, passes down from generation to generation from the nation’s fathers. (Collected Works [1924], 226)

It was God Pearse invoked when he stood outside the General Post Office, Dublin, to read the ‘Proclamation of Independence’ (24 April 2916). In time, the ‘Preamble’ to the Irish Constitution (29 December 1937) likewise appealed to ‘the Most Holy Trinity’ as its ultimate authority. The influential American Irish politician Éamon de Valera (1882-1975) owed much to Pearse and his romantic vision of God-fearing, Irish-speaking citizens living peaceably and productively together in a new Gaelic Republic. While rejecting the bold, progressive socialism of James Connolly (1868-1916) and other leaders of the Rising – as Tom Garvey’s fine book Preventing the Future (2004) makes clear – Catholic faith and tradition had a determinative impact on De Valera’s vision for, and leadership of, Ireland in the mid-20th century.

So, how should the Catholic church’s failures now be seen in light of modern Irish history?

First, as noted above, as a breach of trust between church and people. The recently retired Roman Catholic Archbishop of Dublin, Diarmuid Martin (b. 1945; Abp. 2004-December 2020), bore in his body the fallout from damning official reports on clergy abuse and the church’s failure to heed warnings and implement recommendations. If not a condemned man, Martin became the face of a condemned, socially alienated church. His was a vicarious guilt by association.

Second, the voice of the Irish Catholic church has been effectively silenced. This was evident in two recent referenda on constitutional change. The first, in May 2015, moved to permit marriage between people regardless of their sex: 62% of voters (with a 61% turnout) supported the change. The second (May 2018), to permit abortion, was carried by 66.4% (with a 64% turnout). More recently, divorce laws have been further relaxed (2019) and the word ‘blasphemy’ removed from the constitution (2020). While pillars of traditional Catholic teaching were being pulled down, few spoke out. In the abortion debate, Archbishop Martin was even accused of not defending the Church’s moral teaching. But, of course, he did oppose the changes, but no one cared. He was ‘damned if he did, and damned if he didn’t’, torn between a secular, liberal, Europeanised society (with a vociferous group of progressive Catholic laity) and an out-dated, out of touch, shell of a failing church. Even among the faithful remnant, disillusionment is clear. Gone are the church’s moral and spiritual authority, and socio-political voice, together with its historic standing as a guardian of truth, integrity, justice and Christ-like love. To some, the damage is irreparable; to others, as we will see, past failure can be the seedbed of future success.

Third, and this relates to Ireland as a member of the EU, the collapse of Irish Catholicism impacts Judeo-Christian tradition in Europe as a whole. Europe faces a raft of complex ethical issues. Whatever the Catholic church’s position on these, it has been weakened by the scandal of institutional paedophilia and its systematic denial. Besides humanistic issues, sectarianism and Brexit also loom large in the EU. However much a newly secular, socially liberal Republic of Ireland might wish otherwise, struggles with a fragile socio-religious truce internally and an equally ambivalent neighbour to the north, make charting a course once drawn by, or at least with reference to, the Catholic Church all but impossible.

Understanding the nationalist aspirations of Catholic Ireland’s early leaders and church, to which a majority gave their allegiance, helps explain the dynamics of issues today. Many still see corrosive institutional dysfunction and a reflex for secrecy at the heart of the church’s polity. Lack of procedural transparency and accountability mean the Irish experience will be repeated elsewhere, especially when political will, legislation and therapeutic resources fail the vulnerable. Transparency and accountability are essential for a healthy organisational ‘system’. How much more so as part of the global church’s Gospel witness. For the Irish Catholic church, wounded as it has been by recent events, issues of clerical celibacy, the ordination of women, its relation to the LGBTQI community, and the empowerment of laity, press hard.

I want to end on a positive note. It’s not all bad news. If God does not despise ‘a broken and contrite heart’ (Psalm 51.17), a chastened Irish church – for chaos in the Catholic Church has affected all churches on the island of Ireland – is potentially a healthier community. Green shoots of renewal are already evident. From the fires of institutional pride, internal strife, moral failure, tribalism and conflicting visions of national identity, Irish Christianity is developing a new wisdom and maturity. Inter-church ecumenism, largely unseen since the end of the Catholic Church’s reforming Second Vatican Council (1962-1965), is flowering again in all sorts of unexpected ways. No longer limited to one type of Christian spirituality, new spaces are opening for pan-Christian friendship, collaboration and worship. The pandemic has accelerated this, with ‘virtual’ platforms enabling national and international events. An interfaith initiative in Dublin signals a new openness to people from different ethnic and religious backgrounds. The legacy of Christian nationalism has not, and cannot, deny good new gifts in and through Irish Christianity. Like a stroke victim, the whole Church is learning to walk and talk again.