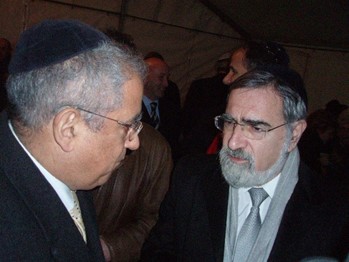 Rabbi Lord Jonathan Sacks, who died on 7 November, was a towering figure in my life, as he was in so many lives inside and outside the Jewish community. I first encountered him in the 1960s, when he was barely 20. My father had heard him speak – I think during or soon after the Six Day War (1967) – and was so impressed, he said he had heard a future Chief Rabbi. He was right. Jonathan Sacks became Chief Rabbi in 1991 aged 43, the youngest holder of that office, a position he held for 22 years.

For those of us in his generation, Jonathan Sacks was a compelling figure. Unlike his predecessors, including Lord Jakobovits, he was strikingly normal. Born and brought up in London, he wasn’t from a ‘religious’ Jewish family and didn’t speak with a heavy European accent like many Jewish emigrés. Good looks and a sonorous voice enriched this skilled communicator and gifted scholar, who had the ability to make complex theological and philosophical ideas both digestible and relevant. For this, and his sheer humanity, he was the confidante of Prime Ministers and members of the Royal Family. As the Prince of Wales said of him in tribute: ‘His immense learning spanned the sacred and the secular, and his prophetic voice spoke to our greatest challenges with unfailing insight and boundless compassion. His wise counsel was sought and appreciated by those of all faiths and none, and he will be missed more than words can say.’

Had he not been a Rabbi, Jonathan Sacks would probably have been an academic, and was honoured widely for his scholarship. Unlike many academics, he knew ideas need ‘selling’. He trained to become a better communicator and never avoided public debate. An article in TheTimes in 2010 saw him challenging the atheism of the eminent Cambridge cosmologist Prof. Stephen Hawking, who questioned the existence of God because of a lack of scientific evidence. Rabbi Sacks’ response is worth quoting – and remembering:

But there is more to wisdom than science. It cannot tell us why we are here or how we should live. Science masquerading as religion is as unseemly as religion masquerading as science. I will continue to believe that God who created one or an infinity of universes in love and forgiveness continues to ask us to create, to love and to forgive.’

Despite his gifts, Rabbi Sacks was modest and, disconcertingly to some, ready to admit ignorance and uncertainty. He was also honest, admitting on one occasion, he ‘never felt particularly gifted or qualified to become a Rabbi‘ But he was clear: ‘I did it because I heard a voice telling me to be one.’ In this role – particularly as Chief Rabbi – he became a champion of faith – all faiths – and an opponent of secularism. His respect for all faiths angered some ultra-Orthodox Jews. So, in deference to protest, he made changes to the 2nd edition of his The Dignity of Difference (2002). But his respect for religious pluralism remained.

Rabbi Sacks’ faith shaped his response to the cancer that killed him (he had had two bouts previously in his 30s and 50s). No-one except close family and friends knew. Asked why he kept his condition quiet he was characteristically philosophical. He had seen his father weaken after several operations and then strengthen after prayer. In an interview with Yair Rosenberg in The Tablet, Rabbi Sacks said he admired his father’s faith and his attitude to cancer; as he said, ‘I’m leaving this to Hashem (God). If he sees that it’s time for me to go, then it’s time. And if he still needs me to do things here, he’ll look after me.’

Rabbi Sacks had, of course, his weaknesses. He was happiest reading, writing and teaching. Management – particularly of individuals – was not his strongest suit. I had experience of this. In early 2007, my local Rabbi departed precipitously. It emerged members of the synagogue, who were unhappy with his style and stricter observance, had inveigled their way into elected offices and engineered his resignation. The Chief Rabbi could have intervened. But letters to him went unanswered. All we had was the offer of a prayer, to be recited at the Extraordinary General Meeting where the plotters would be ousted. To some, Lord Sacks’ views were at times positively illiberal. In The Dignity of Difference, for example, he pointed to the legalising of abortion and homosexuality as evidence of ‘a decline in morality’. At the time, I wondered how not forcing women to have children and removing the stigma from gays could really be considered ‘amoral’? Faith, it seems, raises such questions, and does not always provide clear answers.

For all his gifts and strengths, Lord Sacks had blind spots. He was slow to see the potential power of the Internet to do good, believing that, among other things, it threatened national identity by fuelling non-national affinities. In The Dignity of Difference, he even suggested blogs ‘massively amplify’ a person’s ability to exclude opinions. It seems he had little sense or appreciation of the learning the web imparts and relational benefits of much social media.

Maybe leadership in the Jewish Community – as elsewhere – is an impossible task, given the many levels of observance in modern Judaism. As Lord Sacks observed: ‘If you look through Jewish history Jews are great individualists. There are great Jewish leaders and there are very few great Jewish followers, so leading the Jewish people turns out to be very difficult.’

Thankfully, Jonathan Sacks was blessed with a sense of humour, as Lord Carey, Archbishop of Canterbury, discovered. Appointed at almost the same time, they found that they both supported Arsenal FC. Lord Sacks tells the story.

I wondered whether we might like to have our first ecumenical gathering in his box at Highbury stadium, then Arsenal’s home ground: a midweek match for obvious religious reasons. We both enthusiastically agreed, and the great night came. Before the start of the match we were taken out onto the sacred turf itself where we presented a cheque to charity. The public address system announced who we were, and you could hear the buzz go around the ground. Whichever way you played the theological wager, that night Arsenal had friends in high places. They could not possibly lose.

Arsenal suffered their worst home defeat in more than 60 years: 6-2 to Manchester United. Next day, a newspaper speculated that if the Archbishop of Canterbury and Chief Rabbi couldn’t engineer an Arsenal victory, wasn’t God’s existence finally disproved? Lord Sacks replied with characteristic wit and good humour: ‘I said, to the contrary. It proves that God exists. It’s just that he supports Manchester United’!

Our hearts go out to Lady Elaine, his children and brothers in their mourning.

May his memory be for a blessing.